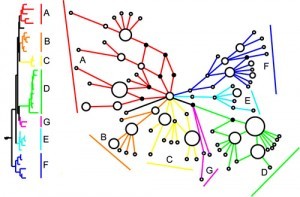 This project takes advantage of revolutionary genetic technologies to characterise the nuclear genomes from ancient animal remains. By combining the resolution of thousands of DNA markers with the time depth of archaeology, this project aims to fulfill the potential of DNA to address fundamental questions regarding domestication. More specifically, we will address key unanswered questions regarding the spatiotemporal pattern and processes of animal domestication including: 1) where and how many times did early animal domestication take place, and 2) when did the mutations that are known to differentiate modern domestic and wild individuals first appear, and how often were similar genes selected for across species?

The ability to directly observe genetic variability and quantify admixture in ancient animal remains will means we can expand the potential of how domestic animals can be used to address archaeological questions including: To what degree did domestic animals hybridise with regional wild and domestic populations, what is the legacy of that admixture in modern populations, and 2) do the combined datasets support similar patterns of  human migration across the Old World?