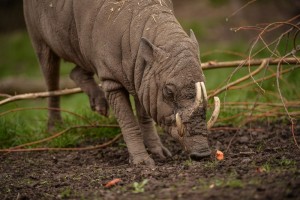 The island of Sulawesi in Island Southeast Asia sits between Eurasia and Australia and its unique set of plant and animal species has fascinated biologists since Alfred Wallace. Here, to understand the origins of Sulawesi’s three largest and iconic mammals, a ‘deer-pig’, a 'warty pig', and a 'miniature buffalo', we combined morphological and genetic approaches with novel geological reconstructions. Our results show that though each of these three animals may have arrived on what is now Sulawesi at different points over the last 13 million years, all of them began expanding across the island simultaneously about 1-2 million years ago. This timing exactly coincides with geological evidence suggesting when the arms of the island began emerging from the ocean. This coincidence indicates that the highly biodiverse and endemic ecosystems of Sulawesi assembled over a far more recent time frame than previously thought.

See some of the coverage from Science Daily here.

See the publication in the Proceedings of the Royal Society B here.